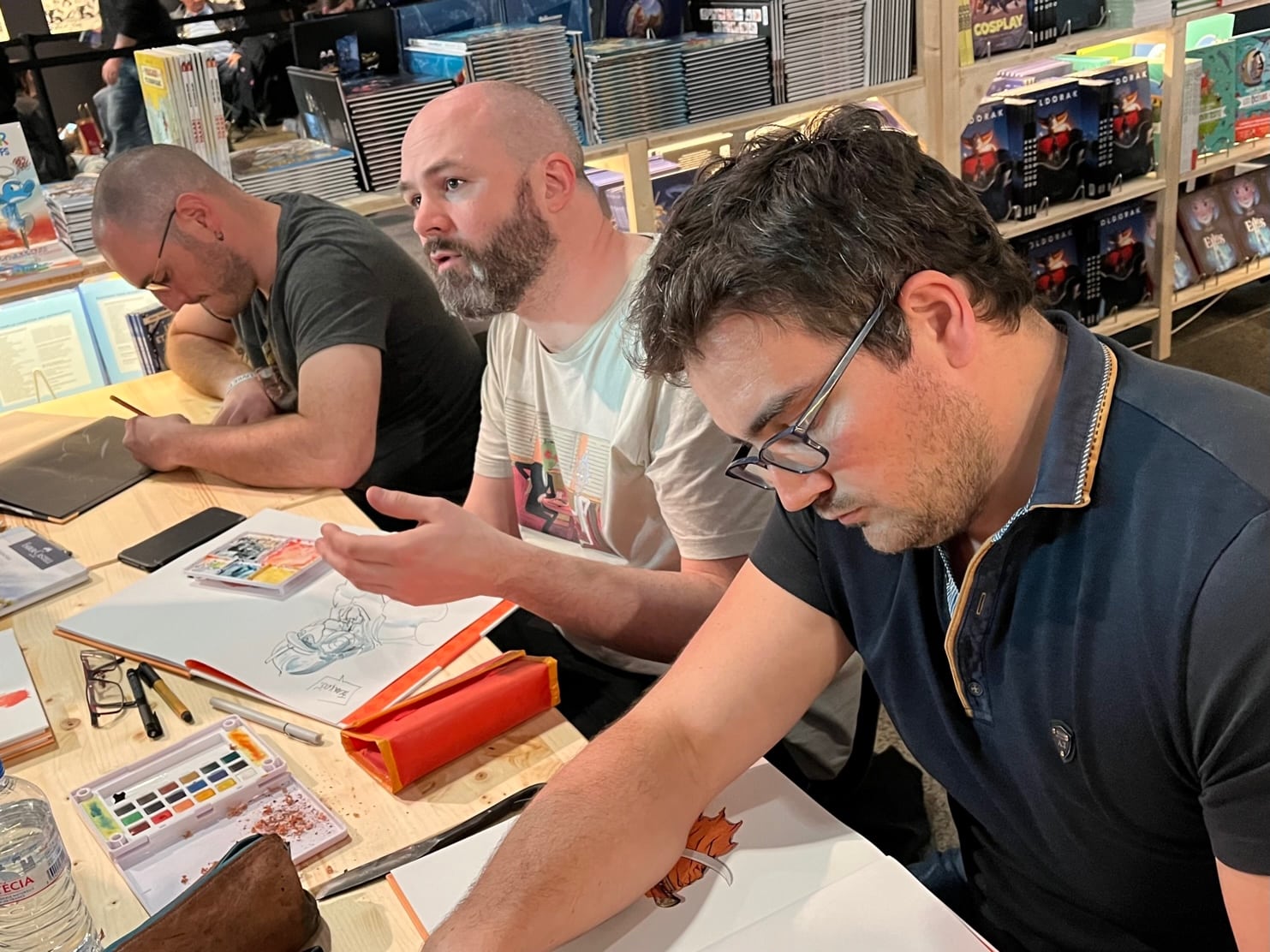 They are three, Vincent Bruges, Ronan Toulhoat and Yoann Guillo. They play, so to speak, in the same court and draw together, in equal parts Cossacks published in Lombard. Scenario of course by Bruges, but sharing supported by the color that has become crucial to the drawing with Toulhoat and Guillo. An album that is both experimental and atypical, that amazes, seduces, challenges. The three authors responded with passion to their intentions, their projects on Ligne Claire during the last book fair in Paris. Interview by Jean-Laurent TRUC. (A big thank you to Ronan Toulhoat for the documents that illustrate this article thanks to him).

How have you both immersed yourself in the wake of these Cossacks and created a work structure that rewrites the design principle of a cartoon?

Vincent Brugeas: One day I read an article about the Cossacks, domestic pirates. It became very short with the interview of a Ukrainian historian on this subject. In short, the Cossacks are cowboys all year round who plunder the steppe and in the summer go on raids on the Black Sea coast. I saw the potential, alone in my corner, and I speak to the langobard. I tell this to Gauthier, the editor-in-chief, who asks me to do this topic. We had a group that was in the process of being created with Ronan and another designer leaving the adventure, hence the delay. Ronan could not take on the album on his own, and Yoann came into the game.

Ronan Toulhoat: In fact, the project was put on hold and we had a lot of discussions with Yoann about the importance of colors in comics. In the narrative of the pages and for its commercial aspect, the seller. It did not seem to us normal that the colorist should not be considered an author. I thought there was something wrong with this pending project on Lombard and I offered to turn it into a laboratory to show that color can be much more than what we consider it today.

Color as a supporting element, designs and thus the engine of history?

RT: Completely included in the measurements, and I suggested he take up more space in colors than I did in the drawing. My specialty is character design. I leave it there. After the storyboard, I draw the characters soberly, without adding strong ink. It’s up to Yoann to take care of the scenery, the moods, the moods.

So exactly how did you work with four hands? What was the background, set or characters?

As for the scenario, are we staying in the classic? Or does it change the scripture?

VB: No, because it was already written. I had another problem, a format change, 70 pages and Le Lombard went after less for more publications. So I rewrote several times, I could not get in and we ended up making 62 pages. But it was not related to the graphic structure. We wanted landscape, adventure.

Yes, you gallop fast in this album.

RT: By bringing light with Yoann.

Yoann Guillo: I really broke my head over what to do in this album. It was a laboratory.

And really a first?

YG: I spent most of my time at The Cossacks with lots of narrative choices, endings. There was always an artist who had this role in a classic drawing. A graphic director, and in the end it was me who had this responsibility. With Ronan, we have in our experimental approach, we have almost made an inversion. The design highlights the color.

YG: So I was wondering what I could afford on Ronan’s drawing. Now, with the positive feedback, I think I can go further. Les Cossaques are adventure, freedom, passages. We wanted all the power of Ronan’s drawings as we made them brighter. There is no side edge.

This truly brings another force to what we are used to seeing.

RT: What interests me about an album is that the drawing, including the color, serves the scenario as well as possible. Above all, we tell a story that needs to be immersive. I no longer want to believe this idea we have about the French-Belgian cartoonist at the top of the pyramid, and forget the album.

YG: It’s the album that’s at the top. And if we are to put our ego aside to go after a concept, we must do so, and we agreed.

Yes, but Vincent and Ronan are, so to speak, an old couple. So it’s not easy to play three. However, we feel your complicity in the Cossacks.

VB: It was Ronan who made the connection. I actually did not come back. On volume 2, Yoann’s opinion of the storyboard interests me. A third eye. When I write a script, I ask myself what the designer wants to do or not. With the work to be done for the color, Yoann had to accept.

YG: Before I made comics, I trained in visual communication and advertising. I can put my performance in place, the coherence of the concept, of the readability.

Is it more freedom?

YG: Yes, and we’re stepping out of my role as a classic colorist. I really like. I can comment on the storyboard, see if a box goes wrong, confirmed or not by the editor. We act as what we set up for Grendizer. We are at the service of the result. Our dialogue worked well with Ronan. I like to try to see if we can go further.

RT: For that to work, you had to trust everyone’s professionalism and talk about everything in advance. You also need a desire to start and do better. We are kids in a sandbox and we have fun.

VB: Yoann does not participate in the production of the storyboard. It’s coming eventually. Yoann needs to have a fresh eye. We hold work structures every time in pairs.

RT: We know where our role ends. And we trust each other. We ask ourselves the right questions from the start.

What techniques do you use?

There is an atypical hero, a traitor in the eyes of some, Karlis, followed by recruiters with a romantic role, plus the vision of what the Cossack is.

RT: There’s the Slavic adventure, a bit like you said to Michel Strogoff.

VB: We discover the world of the Cossacks by small touches and the importance centered around the three main characters, Karlis, Zahra and Sachko. Zahra is the cynic. Sacko idealizes and Karlis arrives, might seem cowardly, but flees to respect his principles. On the contrary, he is brave.

In your manuscripts you always talk about society, the environment, the ideal. It is a recurring background with you.

VB: Yeah, a bit like a filmmaker who has the same theme from movie to movie. I stage my ideas from the pirates to the Cossacks. We have our hobbies and it all depends on how we treat them. With Cossacks, the hero is gifted but does not have the war spirit. He has a Thorgal side in celibacy, a little silly.

RT: With house training. We want to show that war deters him.

VB: He’s crushed on what he’s supposed to do as a hussar.

RT: Yoann has a good definition. It’s a bit like us westerners living in a world protected from a sudden threshold confronted with a violent reality. We did not know that the album would be released at a time like today with what is happening in Ukraine.

A Cossack is not just a warrior.

VB: They are mercenaries, but they are also breeders and yet exclude women. Yet Zahra is there. Volume 2 will be more explanatory about the character. We would like to start on 4 or 5 volumes. The idea is, every time an ending to the narrative frame started, to resume the outline of the old series on Blueberry. We follow a character like Karlis, we see him evolve. I’m finishing Volume 2.

RT: It’s the storyboard, with pencil and the first page is done.

YG: It was up to me to break my brains and I found the direction by avoiding doubt. The method can evolve.

You really bring a new vision to the compelling result.

RT: I’m moving on. Yoann’s work is sublime. We think about getting the best possible result with a mix of everyone’s work. We wanted to contrast graphically and expand the framework.

YG: I had the chance in my albums to work with writers who left me free. And I surprised. My approach is not just to put colors in an album, but to see how far we can go, what pleases.

Do you have other projects in common?

VB: We have a project in Dargaud that takes place in the Middle Ages, Tête de chien, knights that go from jousting to tournaments. In Champagne in Roy des Ribaud’s time with 120 pages and 20 pages of chapters. And the hero will be a fighting woman with a shield with a dog’s head. How will she fit in, what are the true values ​​of chivalry?

RT: Yoann is going to bring a lot to the atmosphere, the graphic efficiency. He, like us, is involved in the three-leaf clover project.

So you have two series in trio, the sequel to Cossacks and Head of Dog.

VB: If in Cossaques Yoann it’s 70% and Ronan 30, we go to Tête de chien and turn around. We are still looking for something else without ego in the equation.

RT: We have one last project at the Comix Bureau with Brice Cossu and Alexis Sentenac, who will be the artistic director who provided the foundation of the universe. Vincent made the script for the first three volumes, Brice made the storyboard and the pencil, In Ink and Yoann the Color. We stay in collaboration with the idea that we are better together. The name would be TEQ, the Earth in question.