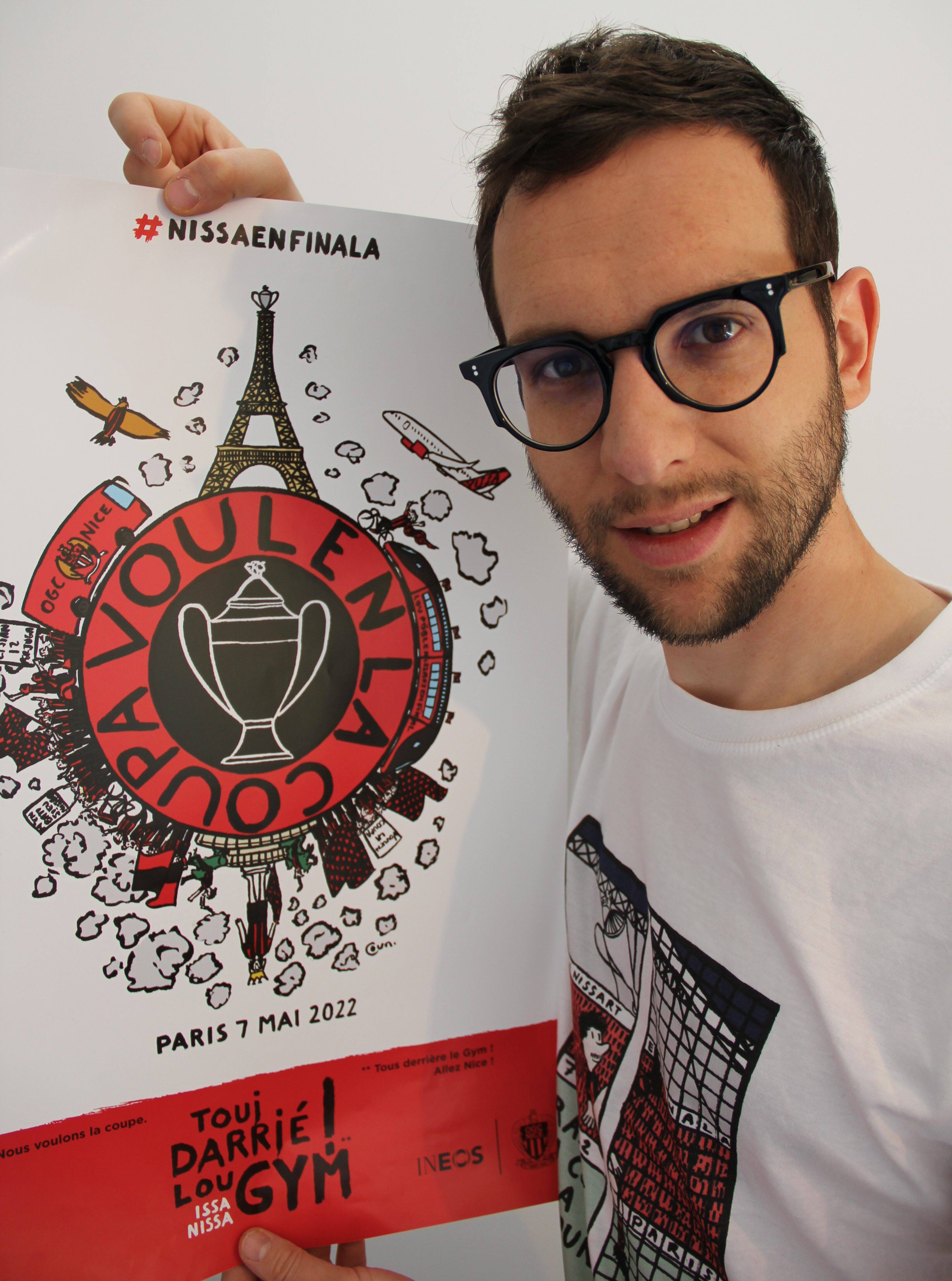 In Nice you had to live with blink or damn deliberately not to see them. They are everywhere. Almost on every corner. Posters published in early April by the club to guide the Aiglons to triumph in the final. And above all, invite followers to show their red and black passion.

Behind this work hides “Coun”, a 34-year-old designer-illustrator from Nice. An exercise and culture enthusiast nissarda. “I proposed my drawings a year and a half ago to Nice fanzine Quoura Ven Lou Dissata [“Quand vient le samedi”] to help them, explains the man who now lives in Clermont-Ferrand. I had especially made a drawing for Paul Capietto (1) when he died. ” A ardent supporter of OGC Nice, Paul Capietto, known as the “shepherd”, died in 2019.

Three for the price of one

The collaboration works. The artist distills his productions on the pages of the small booklet until the club notices him. The pencil lines lead to a telephone call.

“Fanzinet had some drawings published on posters, indicates “Coun”. Virginia [Rossetti, directrice de la communication du club] saw them and thought it was cool. she asked Bruno [Martel, le fondateur] who he was working with and then she contacted me. They used the final to take the plunge. “

The 30-year-old has therefore taken his tool to draw the posters. Red and black, of course. With a few unifying short sentences and t-shirts with print in limited edition. “In my job, we make three suggestions to keep one. I sent the three and they were pleasantly surprised. They said to me, ‘We can not choose’. Each has its own uniqueness.”

Nice and Parisian monuments, followers, fervor: everything is represented. “For this (see photo) I would take as my starting point the old club logo. The circle can remember the ball, but also the ground, with all the followers going up to Paris.”

Another sends the elders back to their glorious memories. 1954, year of coronation in the Coupe de France against Marseille. The third gives local colors an honor.

For the past month, his work has been visible on billboards in Baie des Anges and in self-service in the shop on Place Massena. About 50,000 posters have already been printed. Mass distribution.

“I’m over the moon. It’s a great spotlight.” Even though he decided to work under a pseudonym. Although no one knows who is behind these creations …

“I did not say anything, I really wanted to see what it would be like, he laughs. I went to the store, I heard people talking about it. Children, grandmothers … It brings people together. Some of my friends even followed my Instagram page without knowing it was me! “

His crazy adventure will take him this Saturday, May 7, to the bays at the Stade de France. Few will recognize him, but all the people of Nice will have seen his posters before heading to the capital.

A song for the Eagles

The rhythm is catchy. Well known by football fans. A few days ago, the song by rapper Vegedream was composed for the Blues at the World Cup 2018 cover in Nice style. “Bring the cup home” became “Pourtas la coupe à maioun”.

This anthem was composed by Nice teacher Julien Alquier and is another initiative born to support the Aiglons. “Basically, Julien made the song for fun with a little Youtube editingsmiles Patrice Arnaudo, a member of the Association of Regional Language Teachers at the Nice Academy. I thought it was fun and I showed it to my second graders. “

Motivated, some young people from the high schools Estienne d’Orves and Parc Impérial decided to play the game. “Girls have taken the chance to come to register for the holidays in the premises of France’s Bleu Azur”welcomes Patrice Arnaudo, professor of Julien Alquier at the time … and the designer “Coun” at the origin of the posters.

With a few match photos and comments, the clip and the two-minute-long song promote local heritage, according to Patrice Arnaudo.

“The project hatched in our heads very late, we did it for fun. Just like the stadium unites nissart people.” And unites enthusiasts.