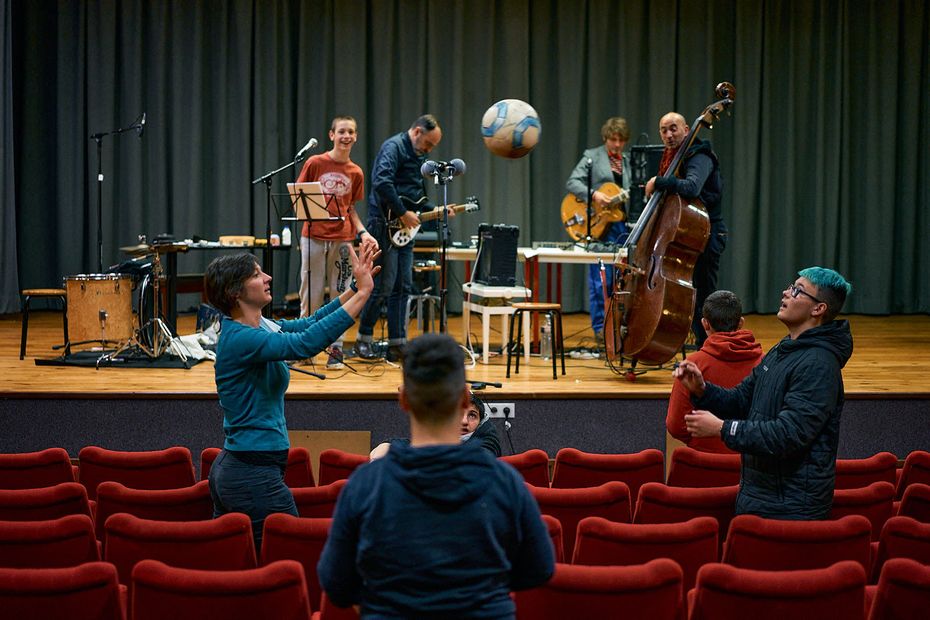 Over the course of several weeks, a group of teenagers with academic, family and mental difficulties and four musicians from the alternative rock group Bancal Chéri harmonized their creativity by inventing an album, a CD, a music video and a live concert together from a blank sheet of paper.

How to play your own score in a childhood full of fake tones? Thanks to the music, how do you find the way to listen? How to open up a field of opportunities for voiceless children?

The answer can be found at the ITEP (Therapeutic Educational and Pedagogical Institute) Leconte de Lisle in Luxeuil-les-Bains, in Haute-Saône. It is in this type of medical-social institution that young people who are very fragile, suffer from mental disorders and behaviors that make them unsuitable for traditional structures are cared for.

These children have difficulty relating to others and struggle with limitations … When they are frustrated, they “climb up towers” and have uncontrollable reactions

The term “acting out” generally imposes a negative connotation, it to attack the frame in a violent way. Acting out is then the result of children and young people not having the opportunity to put their feelings into words.
In the absence of words, the violence speaks and the evil remains in check. The choice of this title for the project is not a semantic provocation. It overturns expectations, counteracts expectations: passage à l’acte here corresponds to the concretization, in actions, of a positive thought.

Acting is not only negative!

Every year, within the ITEP of Luxeuil-les-Bains, the “Passage à l’acte” project gives these children the opportunity, during a songwriting workshop, to become writers and composers of their own stories.
“The interest of this project is to create a gap between what young people know and something new. Go beyond what they are used to to discover new horizons” specifies Amélie Thomas, teacher and creator of the “Passage à l’acte” project.

First there are Matthéo (the big one), Matthéo (the small one), Noah, Théo, Kylian, Lorenzo and Mathys. Seven children and teenagers aged 10 and 14 from the Burgundy-Franche Comté region. All are residents of ITEP in Luxeuil-les-Bains. And all of them, behind the banal appearance of today’s children, hide behavioral sequelae that make them unbreakable and in a way unclassifiable in the usual social and pedagogical structures.

Then there are Nicolas, Roland, Dimoné and Mathias, musicians and singers from Bancal Chéri, a big rock band on the French alternative stage. Four talented sweet-crazy, fifties with communicative energy, driven by creative ingenuity and the desire for communication. The four musicians have already participated individually in this project. They come back “in force” for this new session with professionalism and kindness.

They really took into account each child, their difficulties, their potential.

This power to do is a superpower! It concretizes, at the moment, that which a priori can only appear as an old dream or a fashion phenomenon: to write a song, play an instrument, perform on stage.
Together they will develop their “Passage à l’acte” in 3 phases: writing songs, recording and performing on stage during an exceptional concert. This is what children first learn: to have confidence in the ability to express their own universe.
Everyone will learn to write, move, sing, dance and transform. To address others, communicate their feelings, produce culture and thus reverse the phenomenon of exclusion. A community through music and song, which is also a counterpoint to stigma and isolation.

The sessions are not easy, and the presence of the educators is constantly necessary to ease the tensions that are created between the young people. “Often, ITEP children have a “label”. With the group Bancal Chéri it does not feel. It is not like in the school system where they are the target. On the contrary, they are at the center and in a positive way – Marie Knecth, animator – ITEP Leconte de Lisle.

It is not always easy to work and deal with everyone’s sensitivity! Some recording sessions end with the departure of a young person, hurt in his self-esteem, by an innocent remark from one of the musicians.

I did not expect it to be so intense. The first week was a bit disastrous! I had to get used to the idea that I could not save them and it broke my heart!

Others amaze the professionals during these sessions with their presence, their patience and their investment in this project. “The idea is not to make them sing like Ray Charles, because we do not know how to do it! ” adds Nicolas Jules.

Writing songs is a difficult passage for these young people who are crushed by life. Patiently, each member of the Bancal Chéri group accompanies teenagers in this creative adventure. Writing a song is a journey, almost an initiation journey for these young people. Without trying to analyze it, psychoanalyzing it, we hear that some of their intimacy is being said through their songs.

It’s very poetic what they write … I’m surprised every time!

The common voice is also invented in accordance with certain rules. Learning to hold a guitar, to respect a tempo, to place one’s voice, to listen to the other … All these little exercises, extremely demanding in terms of attention, are so many tests. Moments of intense concentration that contribute to the work that the pedagogical team creates in ITEP.

The “Passage à l’acte” project testifies that certain human and artistic initiatives have the power to draw people up, to open new horizons for them and encourage them to write a score other than that which is composed, for them because of their mortality of origin, their family difficulties, and the violence for which they have been victims.

David Vallet, the director of this documentary, intervenes every year in this project to produce the music video. An intervention that takes place in the last days of the project. Driven by the feeling of frustration at not fully living this adventure from start to finish, he also decides to take action with this documentary!

“Passage à l’acte” is a choral film that tells and shows, between words and music, the enchanted parenthesis and the precious miracle of a harmony …

“Acting out”, a film directed by David Vallet
Production Keren production, in co-production with Télé Bocal and with the participation of France Télévisions

Available in replay for 1 month France.tv