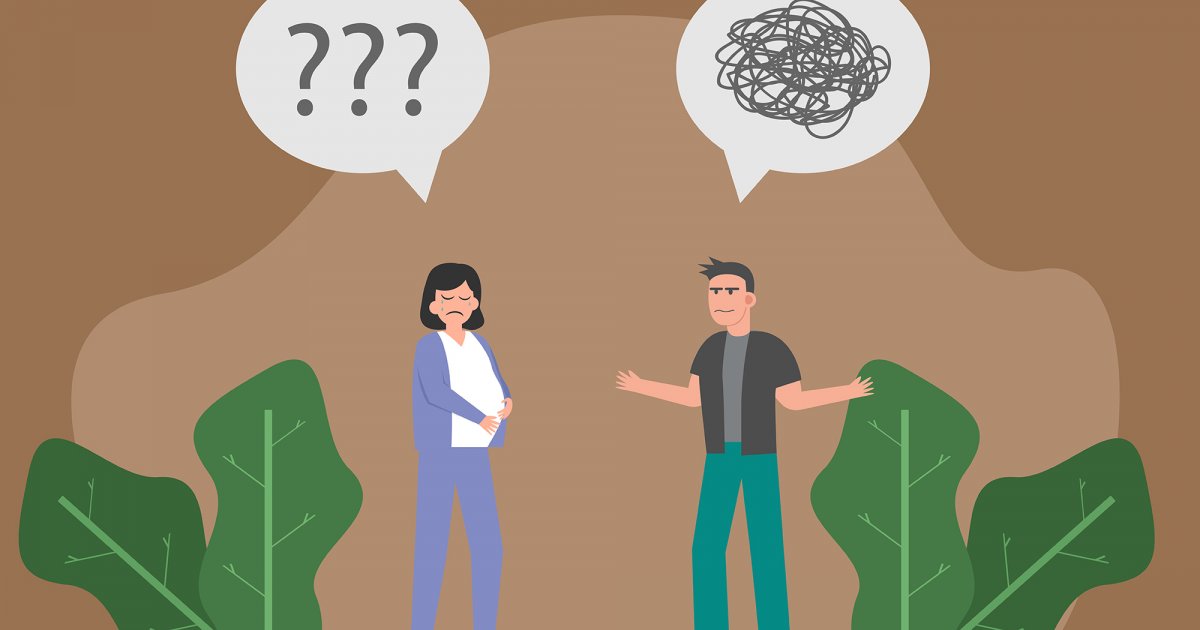 I’m going to be a father. Usually it’s happy, desired news, fruit of love … but not in my case. I did not want to become a father right away, it was not a decision we had made, and the way I found out happened in a very specific context. We’ve been in a relationship with my boyfriend for 9 years now. We met at the beginning of our studies in Paris. We have lived some very good years, others less, as a classic couple. But since the first confinement, our understanding has greatly deteriorated.

During the second incarceration, I took the opportunity to commute with my family, who live far away, in order to take advantage of them and take the time to think. I was feeling really good and even though I missed my boyfriend, I felt like we were about to run out of something. After all, after 5 months away from each other when I returned to Ile-de-France, we decided to give each other one last chance. In the beginning we found each other and the separation had created a certain lack, but very quickly took on the problems we encountered: lack of desire, feelings that looked more like tenderness than love, lack of projects … We spent a few moments together , and I felt like I was drifting away. I explained to her that I was going to leave for a while until she and I found housing and that when I came back we would make sure to sell our apartment on.

A late abortion after an unwanted pregnancy

A few days after I left, she asked to see me. She was pregnant. I reacted very badly, because when we knew each other, she took a birth control pill, and we agreed. I did not understand how that was possible and how the timing could fall so badly. She had stopped taking birth control pills when I was away for several months, but I knew nothing about it. I felt trapped as if she was forcing me this paternity to stay. I did not want to keep it, she did. I thought as a 30-year-old we still had time to rebuild our lives and start a family in a better context, but I respected his choices. Far from me, the thought of not taking on my role as a father, I have always wanted to be a father, but not like that. After a lot of work and a start with psychotherapy, I decided to stay.

I ended up getting caught up in the game, projecting myself with a child, and when we maintained an attachment to each other, the situation was not too contradictory. I ended up resigning and saying to myself that after almost 10 years, the situation could have been worse. But not everything went as planned. When I was almost 4 months pregnant, my boyfriend had a late abortion. We lost the baby and the period was very difficult to deal with psychologically for her as for me. We had not revealed it yet, we were a little superstitious and the context did not help. So there you have it, we both had to deal with this loss.

A new pregnancy on the way back from diapers

She was bad. I thought to myself that what had just happened to us might be a sign, a sign that we were really going to divorce. I left her. As part of my sporting activity, I met a girl. At first we just talked and our exchanges became more and more intimate. I told her my whole story, my relationship, the unwanted pregnancy, the abortion … and she did not run away. She was very present and attentive. She encouraged me to resolve my relationship issues before committing to anything. I thought a lot about her, we saw each other often, and even though I felt guilty about this infidelity, I saw another possible future, a future that I liked.

I finally took time to reflect, left my house for a few days, and when I returned, I was determined to break up. I took the time to make the decision because I did not want to ruin my boyfriend, who was already in a particularly destabilizing situation. I did not want to weaken her even more and I had left some time between the abortion and the announcement of the breakup. During the meal, where I intended to tell her my decision, it was her who spoke first: she was pregnant again and happy. Yes, we had loved again maybe 1 or 2 times at the return of diapers, but I could not believe my ears. I blamed myself terribly because I informed him for my part that I had met someone I had feelings for. I was angry, upset and did not have an appropriate reaction at all.

Stay for the baby or leave each other?

A long discussion followed. She did not want to resort to voluntary termination of pregnancy and again, even though the abortion would be my choice, I could only go in her direction. I then put forward the hypothesis of being present for the child, of assuming my paternity, but that we would divorce … And there began the threats. “I want to live near my family in the Caribbean if I have to raise them alone.” No matter how much I tried to tell her that she would not be alone in education, she would not hear that we were going apart. And for me, it is unthinkable not to be able to see my child grow up. That night I slept with a friend. I called the person I had met who thought I wanted to tell him that we could finally try something together … It was a hard blow for everyone. She did not understand how this situation was possible, and she was right: I could only blame myself.

I do not place myself at all as a victim, on the contrary. And contraception and intercourse is the story of two people. I simply would have liked to have been notified the first time about stopping contraception. And this second pregnancy I could have also stopped the relationship with my boyfriend or protected myself, but I no longer knew where I was. Now I have to assume that this child is coming who did not ask him for anything. But it’s certainly not how I imagined becoming a father. Nor is it how I imagined living my sentimental life. I’m crushed that I had to end this budding story. I blame myself for hurting the one I have shared my life with for years. And I am concerned for this child who, though he will be loved and cherished, will not be born into a couple where harmony and love reign. I do not know if I made the right decision, but it was the one that seemed the right one for me for the child. I force myself to stay for him, but I’m afraid it’s coming back later …