Available since late April, the DeepCool AK400 is a tower cooler with a price tag of around $40. It is not completely unknown since it is a version derived from the AK620 that we have tested in our columns.

We find a compact solution equipped with a 120 mm PWM fan. The base uses DirectTouch technology, while the architecture relies on several heat pipes to transport heat. The bundle includes attachments for Intel’s LGA 115x, 1200 and 1700 sockets or AMD’s AM4.

We tested it with a Core i9-9900K pushed to its limits. Announced with 220 Watts of heat dissipation, is it efficient? Quiet ?

Placed in the mid-range segment, the AK400 is a tower cooler equipped with a 120mm fan. It is not completely unknown since we are dealing with a simpler version of the AK620.

The objective is suddenly different with the choice to tackle the largest number via a compact profile. The idea is to minimize the risk of incompatibility.

It comes in a box with a sober design that emphasizes white. The bundle consists of the heat sink, the fan and all the accessories that allow installation on different outlets. On this subject, we know the support for Intel LGA 115x, 120 and 1700 sockets against AM4 for AMD.

We find a cooler with dimensions of 127 x 73 mm for a height of 155 mm. The 73mm thickness, equipped with a fan, is an important argument, especially for dual-channel platforms, as it does not affect the memory slots and leaves space at the level of the first PCIe x 16 slot for the card. We have a weight of 661 grams on the scale.

The architecture uses four copper heat pipes that are in direct contact with the processor. Their mission is to transport heat to a dense set of aluminum fins. It is interesting to note that the four heat pipes do not cover the entire surface of the base.

Deepcool places them symmetrically with two units adjacent in the middle and two others a short distance out.

On the side of the radiator, the 54 aluminum fins benefit from a recess, originally in checkerboard shape, which will not leave you indifferent. The work on the finish can also be found on the top with a plastic top plate that hides the different ends of the nickel-plated heat pipes. Deepcool opts for sobriety. There are no frills, just a small logo in one of the corners.

It is attached with metal hangers and is an FC120P whose frame takes over the design code of the kit.

It benefits from anti-vibration pads on the contact points. s

The speed is between 500 and 1850 rpm. At full throttle we have an airflow of 66.47 CFM for a static pressure of 2.04 mm H2O. This value evaluates the force with which the fan can propel the air. With closed constructions such as those present on Watercooling radiators, a high value is recommended.

The bundle offers a second set of metal hangers if you want to equip it with a second fan. In this case, it will be necessary to pay attention to the orientation to get a duo in Push Pull mode.

There is no tube of thermal paste as it is applied directly to the base.

The implementation on our Intel LGA 1151 platform comes down to a few fairly simple steps. Installation of the AK400 requires the use of a backplate.

The distance can be easily adjusted to each leg. Once in place, four plastic risers are required.

They are identified at the top with the inscription 115x.

Then a mounting frame is attached with four Phillips screws. It is necessary to think about orienting so that the cooler works in the direction of the air circulation of the case.

All that remains is to place the cooler on the processor and then secure it with a Phillips screwdriver. The tightening is done gradually on both sides. Finally, the fan is attached using two metal hangers.

The processor temperature is read out in software via the HWMonitor 1.44 application (CPU Package value). Noise pollution is measured with a sound level meter placed 25 cm in front of the fan. The tests are performed in the open air to exclude the performance of the box. The measurements are taken with the processor at rest with the energy saving technologies activated (CE1 for example) and then with 100% use of the processor.

We first used the CPU Burn utility for 10 minutes. We are in a situation where the package’s TDP value is around 130 watts under Intel’s Extreme Tuning Utility.

After that, we also used Prime95 for 10 minutes. The exercise chosen is Small FFTs in Torture Test. We are in a situation where the package’s TDP value is about 220 Watts under Intel’s Extreme Tuning Utility.

For each test, the room temperature is recorded and we calculate the Deltas. We work in PWM mode, then in +12V. 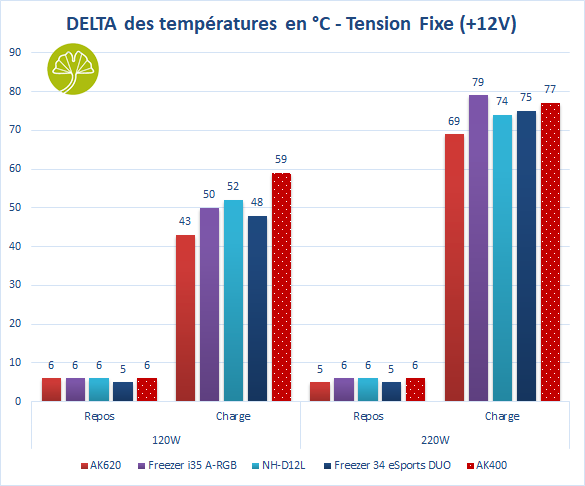 In the first situation, we have a cooler that can meet the needs of our processor. It works at full throttle. In the second situation, the need exceeds the heat dissipation capacities by a few Watts. Suddenly the Thermal Throttling protection is activated. The frequency of our Core i9-9900K has been adjusted to 4.69 GHz instead of 4.7 GHz on all cores. With a speed of 1850 rpm and a relatively dense fin structure, the AK400 remains quite discreet. Our sound level meter stabilizes at 42.1 dBa. We find the advantages of a NH-D12L from Noctua without however equaling the Freezer i35 a-RGB.

We have entrusted the PWM management to our Z390 Aorus XTREME motherboard. We first started a calibration of the fan(s) using the Gigabyte SMART FAN 5 utility. This allows us to obtain different ventilation profiles. The tests were performed with the default profile. 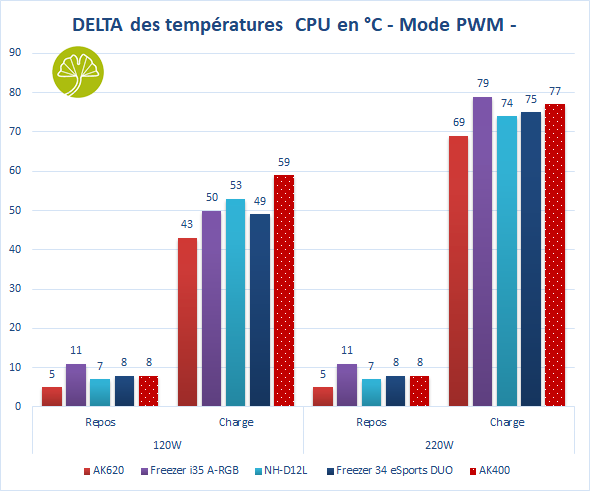 We find the same judgment as in the +12V mode. In 220W, the Thermal Throttling protection is activated as soon as the temperature of our Core i9-9900K rises above 100°C. 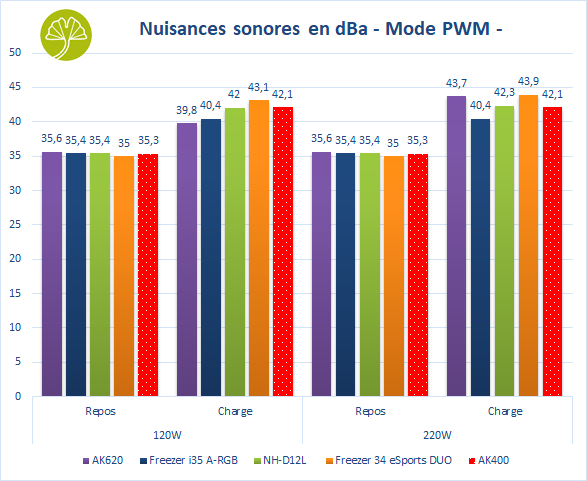 The balance on the noise side is slightly better because the speed of our fan adapts to the needs. We are on a balance between 35.3 and 42.1 dBA, depending on the load on our processor. We find a profile similar to that of NH-D12L.