BMW yesterday presented the third generation of its compact SUV, the BMW X1, which will be launched in October. The Bavarian manufacturer will offer the smallest of its SUVs with hybrid and plug-in hybrid engines. But the great novelty of this new generation is the 100% electric version: the BMW iX1. A version that aims to bring the experience of driving pleasure without local emissions to a fast-growing segment of vehicles. Which makes it accessible to a fairly large audience, even if the price can be intimidating for many. A price that BMW has not yet disclosed is content to reveal that of the hybrid versions of the BMW X1. Versions available from 42,750 euros for the BMX X1 sDrive18i First Edition.

Two electric motors with a capacity of 230 kW 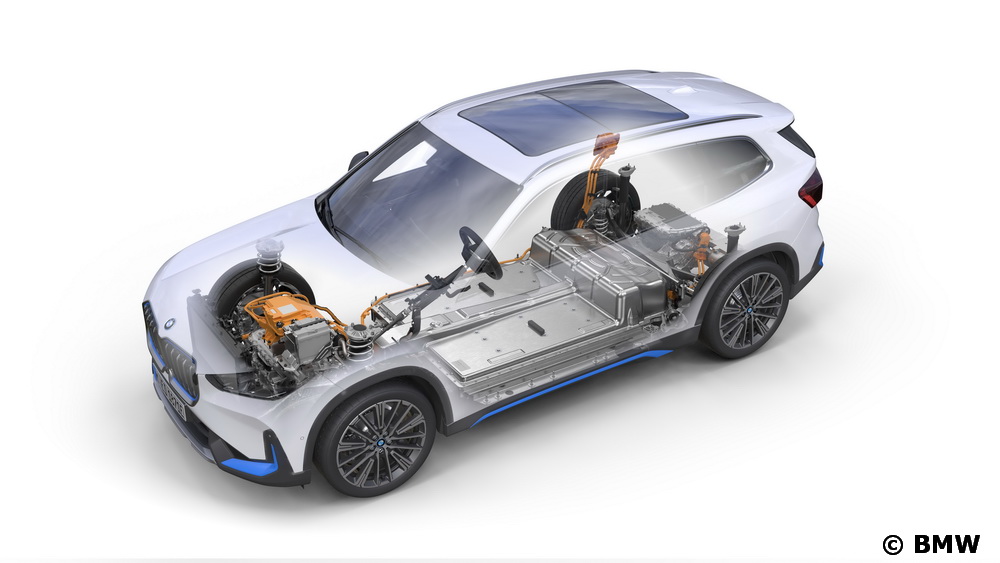 The new BMW iX1 joins the iX3 in the manufacturer’s range of electric SUVs. This model should help the BMW Group reach its target of two million electric vehicles by the end of 2025. The BMW iX1 is only available with a single engine called xDrive30. The SUV has two electric motors, one on the front axle and one on the rear axle. Together, these two engines develop 230 kW (313 hp) and 494 Nm of torque, enough to go from 0 to 100 km/h in 5.7 seconds, with a top speed limited to 180 km/h. In addition, the electric four-wheel drive guarantees strong acceleration, road holding and driving stability in all situations.

A battery with an energy capacity of 64.7 kWh drives the two electric motors of the BMW iX1. Thanks to this battery, the SUV should cover almost 440 km on a single charge in the WLTP cycle. The car can be charged up to 11 kW on AC power as standard, for a full charge in 6.5 hours. As an option, it can collect up to 22 kW for a full charge in 3h45. The BMW iX1 tolerates a maximum power of 130 kW on fast DC terminals. Not an extraordinary performance, but onboard software is said to optimize the charging curve so that it reaches this high plateau quickly and maintains it for a long time. BMW advertises that this will charge the battery from 10 to 80% in 29 minutes. It would also be possible to recover 120 km of autonomy in 10 minutes. 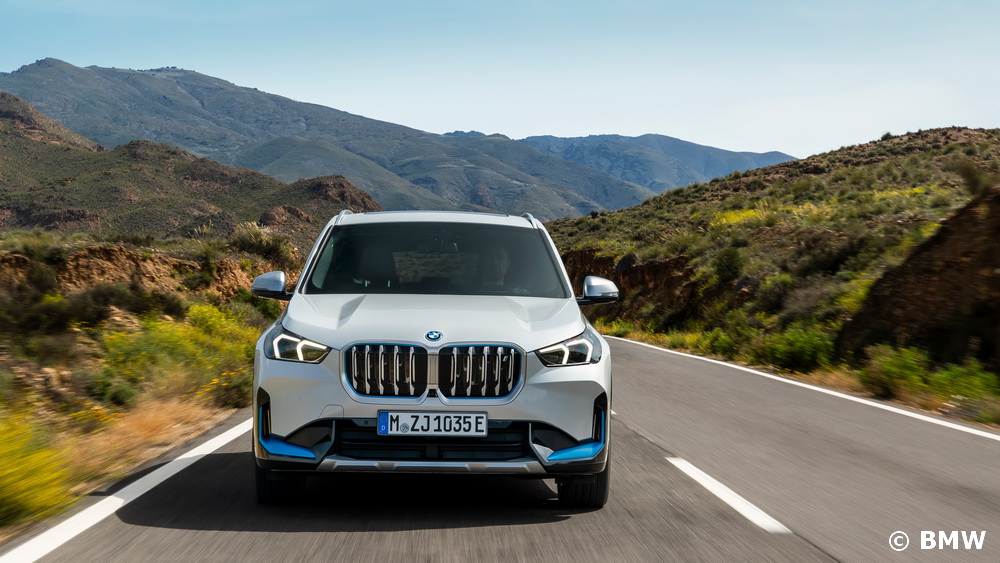 With its muscular appearance, the BMW X1 aims to embody an experience of freedom in everyday life and on long journeys. For the third generation, the surface treatment and exterior design lines show its SUV identity. Distinctive design features include the powerful proportions and the almost square contours of the wheel arches. They also adopt the characteristic style of the BMW X model for the front and rear. However, the front of the new BMW X1 gives it a much stronger sense of presence. A feeling given by a large, almost square grille and X-shaped lines radiating from the sides. Expressively sculpted surfaces and a long roofline are also hallmarks of the new model’s elongated silhouette.

Distinctive elements for the electric version

Aesthetically, the electric version differs little from the hybrid versions. The progressive design and wide equipment underline their premium character. The BMW iX gets the same imposing grille with double beans, the same LED headlights and the same rear spoiler. However, BMW wanted to bring in some distinctive elements. For example, there are some blue inserts on the front and rear bumpers and in the sills. Elements that remind us that an electric motor sets this model in motion. In the same vein, BMW has also provided some distinctive elements for other finishes. For example, the xLine finish has specific design elements, including stylish impact protection. For its part, the M Sport trim emphasizes driving pleasure with features such as large cooling air inlets.

A premium atmosphere on board 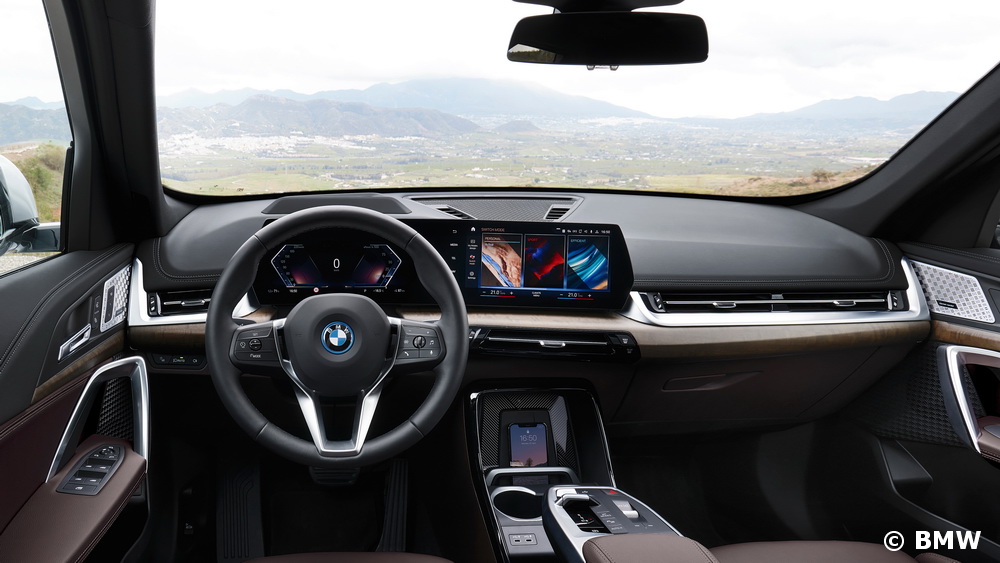 The elevated seating position and premium ambience of the interior contribute to the characteristic driving experience in a compact SUV. The flat dashboard, the curved double screen and the center console are the hallmarks of the interior design. On board the BMW iX1 we find the double screen BMW curved display inaugurated by the iX and i4. This set, which includes the new OS 8.0, is slightly smaller than the iX at 10.25 inches for the driver-facing counters and 10.7 inches for the multimedia system. The floating center console has two levels. The upper part serves as an armrest and contains the automatic transmission selector lever, the start button and the drive mode selector knob. Downstairs there is storage space for a small bag, two cup holders and an inductive charger for smartphones.

Inside, the finish appears polished with double-stitched leather. There are also inserts in basswood, aluminum or glossy black. In the rear, the space is correct thanks to the fairly wide wheelbase and the flat floor. The thermal versions have a small service tunnel that disappears on the electrified variants. The rear of the BMW X1 offers three fully-fledged seats with noticeably increased seating comfort. Modularity is enhanced by a divisible and folding 40/20/40 bench seat. For the electric version, the storage volume can increase from 490 liters to 1,600 liters. In addition to acoustic comfort, passenger protection has also been optimised. The integrated passive safety concept now includes a new airbag between the driver and passenger seats.

A wide range of automated systems 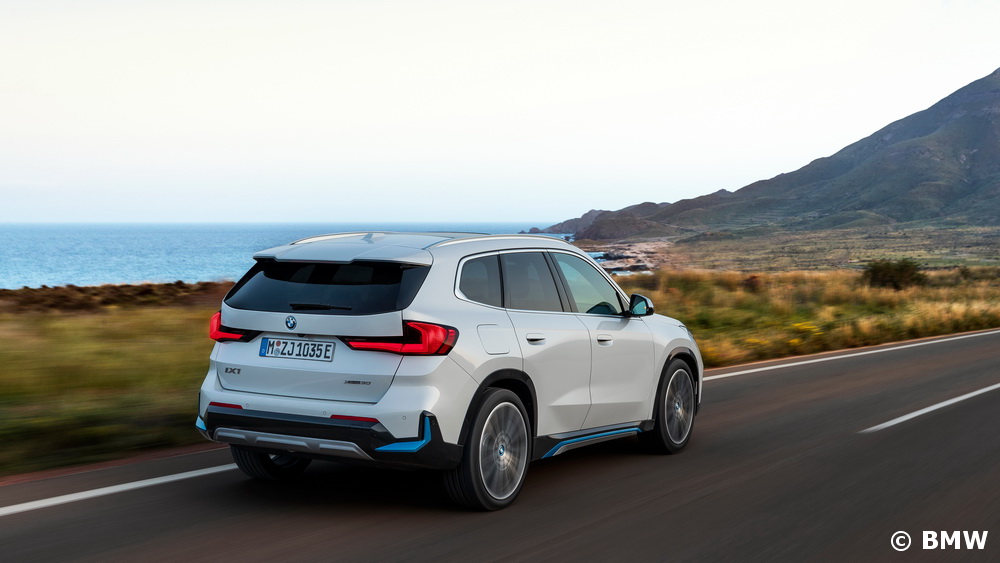 The BMW Maps navigation system and a two-zone automatic climate control system are part of the equipment of the BMW iX1. There are also four USB-C ports and a host of driver assistance systems as standard. Technological progress since the previous generation results in a greater diversity of systems that can be used in the BMW X1. This is especially true for automated driving and parking. Cruise control with braking function and Forward Collision Warning are remarkably standard. The Parking Assistant, including reversing camera and reversing assistant, is also part of the standard equipment. Many other systems are available as options, such as Steering and Lane Keeping Assist. The same applies to active cruise control with Stop & Go function, active navigation guidance or vehicle exit warning.

The new BMW iDrive as standard